Old joke about antivirus vendors comparisson, translated by google from Russian (it has some sence). 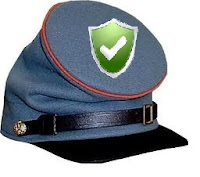 Kaspersky infantry battalion. Makes a camp around the computer digging trenches and antitank ditches, undermines all to hell, swathes of barbed wire in the forty series. The resulting defense can only be breaked at five times (at least) numerical superiority, and only after hours of bombardment.
Advantages: The enemy will be able to go only one way — turning your computer into a scorched desert.
Disadvantages: The soldier must be fed, and minefields and trenches hamper the movement of civilians, so that the resources of the system is left almost nothing.

Cavalry squadron «NOD32». The defense did not keep trained but at the sight of the enemy immediately attacks him. Trying to get unceremoniously, usually — psychic attack with drawn swords. If it fails the first time, scattered in ravines, goes to the partisan and waites for the right moment to repeat the procedure.
Advantages: The best defense — an attack so that this tactic works always, might be not with the first time, but works.
Disadvantages: Sometimes you have to wait very long. The local beauties are born first kids like enemy soldiers, and the squadron is still a partisan of Forests and derailed enemy trains with women’s garters.

Artillery Battery «Avast». Effective against a frontal attack — the enemy that it from the front, can grind virtually any amount, almost without loss to themselves. However, for flank attacks, and especially against rear saboteurs it is very vulnerable. Of course, after the guns will be deployed in the right direction, it handles saboteurs, but it takes time.
Advantages: Gunners feed themselves. Do not ask me how — I do not know. But the system remains almost unaffected.
Disadvantages: Low speed.

Women’s Battalion «Panda». The battalion — the young and beautiful woman, an old military rifles. At the slightest rustle begin a heart-rending scream, and shoot at random (usually — in the sky). At the sight of the enemy faint or run away.
Advantages: Almost not noticeable.
Disadvantages: The beneficial effect is also not noticeable.

McAfee tank brigade. Engines roar, smell grease, grimy tankers pass by grabbing the girls round for the place, and somewhere in the forest is shooting. It looks impressive and respectable in combat is fast, efficiently and ruthlessly. The enemy can not penetrate inside just to be in fear.
Advantages: Reliability.
Disadvantages: Tank Grease now very expensive, not to mention the shells and goryuchem. Sometimes forget about enemies, if  there are many girls around.

The enemy’s army of occupation «Norton». Officers on the Rights of the winners takes free drink schnapps in luxurious restaurants, running from house to house soldiers, requisiting edible, paw women engaged in petty domestic looting. Another enemy is not gonna get here for sure,. But life under occupation, you know, not sugar.
Advantages: No enemy can get inside.
Disadvantages: The enemy is already inside.

Professional sniper AVZ. The present Commissioner of the revolutionary instinct. Desants from flash drive, destroys the attacking troops with napalm, calculates the fifth column of spies in the rear, on the run conducting face-control all the commanders of the soldiers allies. Quickly repairing damage caused by pests, gives a lot of tips for improving the revolutionary vigilance — and leaves no trace of a red sunset.
Advantages: Ready to fight without any preparations and digging trenches. Bedecked bunch of weapons that may be useful for peaceful purposes. Works exclusively for the idea, and very, very quickly.
Disadvantages: Single, with all the consequences.

Alien Base ClamAV on UNIX-based server. They are the input control. Immune to terrestrial diseases, immune to earthly weapons. Not very well versed in the people and the form of earthlings, in doubtful cases passed.
Advantages: system resources are not spent, well typically spent, but on the server.
Disadvantages: sometimes miss the enemy.